Dangerous Mycotoxins – what you need to know

During the last couple of decades, practitioners in the field of Natural or Functional medicine are seeing more and more patients with a complex set of symptoms that never seem to lead to a good diagnosis of anything specific – just a random set of possibilities.  Conventional doctors, equally puzzled, just continue to prescribe one drug after another for symptomatic relief, but never of course, getting to any of the underlying causes.

And for many patients those underlying factors could well be from several potential sources.  I find it rather common to see, chronic, low-level, “flying under the radar” viral and bacterial pathogens, chemical toxins, food sensitivities, gastrointestinal dysfunctions and nearly always genetic abnormalities with specific variants or mutations in critical genes and gene pathways.  Conventional medicine rarely looks for these primal or root dysfunctions and then dismisses many a patient as a hypochondriac.

Some individuals feel they are having an optimal lifestyle – eating organic, healthy foods, exercising, managing stress, and getting their 8 hours of sleep, yet they still have a lot of nagging symptoms and their doctor visits are not producing any answers or improvement. The fatigue remains along with those recurring headaches and nasal issues.  There are others but with the memory problems they can’t remember them all.

But there is another intrinsic cause, often overlooked even by practitioners in Functional Medicine – that being patients dealing with mold/mycotoxin illness.  And it is true… it can be difficult to recognize as it will masquerade as many other illnesses, with lots of vague symptoms and nothing specific.  Mold and mycotoxin illness can range from flu-like feelings that do not go away to serious illness and a nightmare type of fatigue with brain fog that makes everyday tasks nearly impossible.  It is even more challenging when you consider that conventional medicine doesn’t really believe that mold exposure is a problem at all.   But first, what are molds and mycotoxins anyway?

Molds are multiple types of fungi that grow in filaments and reproduce by forming tiny spores that sprout and fly away but are invisible to the naked eye. Mold grows in damp, warm, and humid locations, inside and outside.  But obviously can grow in your refrigerator as well.

We have all seen mold on bread or an orange that took too long for us to consume.  But that is not what is most concerning.  The real problem is mold that we cannot see.  And some individuals can be exposed to serious levels of mold without realizing it.  It can be hiding inside walls, around water pipes that have leaked, around bathtubs that overflowed or in our air conditioning systems.

I once had a patient who came to see me with a variety of strange symptoms that to me was suspicious of mold/mycotoxin illness.  Because it began shortly after moving into an older home, I suggested she have it checked for a source of mold.

She indicated it was thoroughly investigated by a home inspector as a part of the sale.  I strongly encouraged her to have it re-examined.  She did and the inspector almost missed it.  But when he opened the duct directly above her bed it looked something like this: 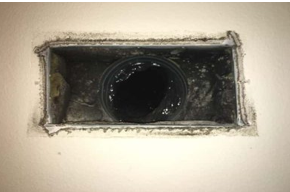 She had lived there for two years, breathing toxic mold for 8 hours/night.  But here’s the problem.  While we may either remove ourselves from the mold or remove the mold contamination from our homes, the mycotoxins produced by the mold remain in us indefinitely until we have them cleared from our body.  Unfortunately, that is not done by just taking a nice little supplement because it is a more complex task, often taking several months.   But, when this is the problem they are dealing with, removal of mycotoxins in our body is critical if one is to ever get well,.

And here is something else that few individuals realize.  It has been estimated that 25% of the world crops are contaminated from mold and fungal growth.  From orange juice to most coffee to peanuts and legumes and very, very commonly in nearly all grains and cereals.  Fungal and mold contamination is the most commonly occurring natural contaminate in our foods.  And yes, even many organic foods.

Dr. Amy Myers, a very experienced mold/mycotoxin practitioner, describes mycotoxins this way: “Mycotoxins are very toxic compounds given off by certain types of mold. Molds are all around us and the vast majority of them are not dangerous. However, there are some molds that produce gas-like substances called mycotoxins. These are very similar to a volatile organic compound (VOC).” 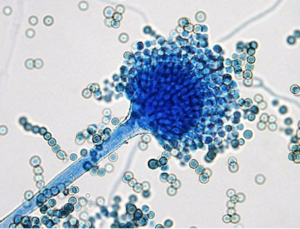 Some individuals are more sensitive to mold and mycotoxin exposure than others.  It has to do with their genetic predisposition.  Individuals with variants or mutations to the HLA-DR gene, and other genes that control inflammation are not able to successfully rid their body of these mycotoxins.  It may be as high as ¼ of the population that are at risk due to these gene variants.  It is not a problem for them if exposure does not take place, but if it does, they can be seriously affected.

And yes, it is also true that one could be affected even without those variants in the HLA-DR gene.  Just having a good deal of inflammation in one’s body with a genetically compromised ability to counteract that inflammation and poor detoxification in our intestine, liver and kidneys can set us up for trouble as well.

The most common symptom of mycotoxin illness is fatigue, but secondarily, headache. However, individuals will have other symptoms specific to their genetics and biochemical makeup. Here is what to look for:

Seeing this list of symptoms might give you an understanding of why mycotoxin illness is considered the great masquerader and look terribly similar to Lyme, Fibromyalgia, Chronic Fatigue Syndrome, and Autoimmune diseases.

It is also sadly true that many a breast implant, when removed, has serious mold contamination growing on those implants inside women’s bodies, contaminating them with these dangerous mycotoxins.  The truly tragic factor – it rarely ever discovered until one undergoes explant surgery.  But by then the damage has been done.  And because either mold growth or chemical contamination takes years to develop, most women and their doctors fail to link present-day symptoms with a many year’s earlier implant surgery

Other symptoms are also possible.  As many will experience flu-like illness or a general ill feeling with things just not being right in the brain.  Long-term exposure, these dangerous mycotoxins can damage the immune system, the liver, kidney, hormonal balance, skin, and brain.  As you can see, they can have a serious and powerful effect on human health

Dr. Daniel Amen, a Psychiatrist, has this to say about the effect of mycotoxins on the brain: “…it damages people’s brain and if damages their brain, they look like they have ADD.  The look depressed.  They’re having trouble of getting along, being successful.”

Indeed, the effect on the brain can be serious.  Notice what another highly qualified mold/mycotoxin physician, Dr. Jill Carnahan, has to say of the effect of mycotoxins on the brain.

I suspect that for some individuals, long-term exposure to mycotoxins may be a major factor in their dementia and Alzheimer’s disease – although, clearly not excluding a number of other factors.  But mycotoxins love the brain as a place to call home

You see, mycotoxins have a serious impact on your mitochondria, our cells engine, that create the energy for the cell to function, including brain cells.  Because mitochondria are in nearly every cell of your body, mycotoxin damage to those powerplants will affect the function of nearly every organ and system of our body – fatigue being the obvious one.  But the damage will produce free radicals that act like cellular rust producing inflammation everywhere, eventually leading toward autoimmune-type diseases.

Now for some good news

The good news is that it is entirely possible to clear your body and your environment of mycotoxins and to prevent toxic mold from growing out of control in your home and mycotoxins in your body.  But the first step is to see if you have been exposed to mold and are experiencing mycotoxin illness.

I have had patients tell me that they do not recall any mold exposure previously.  But when test results come back and it shows elevated antibodies to specific mycotoxins, they are surprised to see that.  When I review possible sources of exposure with them, invariably we will discover the likely source.

For one patient it was working in a musty gymnasium that had a leaky roof.  For another it was a house she rented that was also not adequately sealed from rainwater.  But there are a myriad of other sources and the first and foremost treatment is to either remove oneself from the source or remove the source, and completely clear up all damaged and contaminated material – usually destroying and replacing it, and having it done professionally.

But for many individuals they may have long ago removed themselves from a mold contaminated building, but their health issues remain because they didn’t know that they took their mycotoxins with them, and no one has helped them to clean up their internal damage along with those persistent mycotoxins.

Testing for mycotoxins can be done via blood or urine.  Because our food supply, such as nuts, cereals, and rice are contaminated by mold, but even meat, fruits, nuts, wine, beer, coffee as well, for that reason, mycotoxins can be found in the urine in parts per billion in healthy people.  So, the preferred method of testing is blood IgG and IgE as this gives me the indication of what your body perceives as threats

Blood tests for mycotoxins have been used for the last 20 years and are highly accurate.  The specificity and sensitivity of blood serum testing for the presence of antibodies to mycotoxins in the blood are extremely high.  The test I use is for IgG and IgE antibodies for 12 mycotoxins for a total of 24 test results. These include Mycotoxins from:

So, if you find your symptom picture matching several the symptoms above and you have not found a solution, give some thought to mycotoxin illness as something you should consider and then get tested.